Uncertainty, due to Covid 19 pandemic.
​For more information,
or to register for these games, email Secretary Phil on
​blugras@bigpond.net.au

​The   M R  Hornibrook  Tournament celebrated  it’s  60th  anniversary which was held this year in Brisbane.
The Tournament was complete with challenges and milestones to make it a memorable event.
Brisbane was deluged with significant rain immediately before the tournament and several courses were closed as a result. Fortunately , our relationship with the chosen courses allowed the tournament to continue even with the use of motor buggies. Wynnum  Golf club were especially considerate letting us on a sodden course that had compulsory tee up on four holes.
Oxley and Gailes were much more resilient to the constant rain and all members managed to complete all rounds on all courses .  We even saw some sunshine in parts to the latter two games.
The Milestones mentioned earlier included the 60th Anniversary of the event and  a Brisbane member, John Mitchell celebrating  50 consecutive years , Brisbane Captain Ron Fraser cellebrating 25 years attendance and for the first time in 27 years Brisbane managed to be victorious in winning the tournament. This was especially satisfying to the Captain , having held the reign for some 23 years without a result.

Tom Parry, the then President of the Q.M.B.A. was chairman of the meeting which subsequently elected:


Historical records of the period to 1967 are unavailable. The following office bearers have always worked tirelessly to ensure the continued success of the Club.

The Club has awarded Life Memberships to Max Upham, Gordon Neilson and Des Carey for their efforts and dedicated service to the Club over the years. 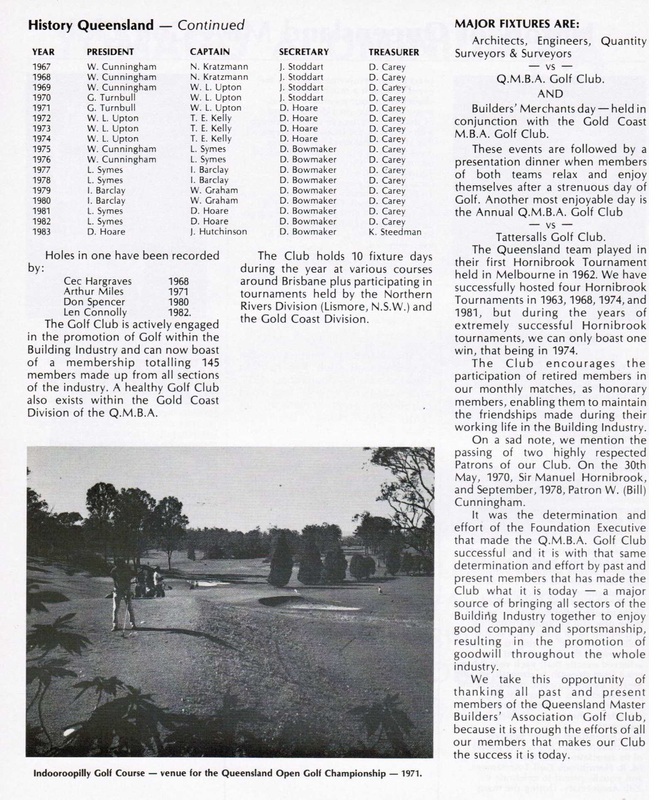